Snow showers, squalls and strong winds will affect portions of the Cascades and Rockies through Wednesday. Meanwhile, a developing storm across the Southern Plains will track toward the Great Lakes into Thursday as severe thunderstorms, flash flooding and strong winds are forecast for the Mid-Lower Mississippi Valley. Heavy snow is possible for the Upper Midwest and wintry mix for the Northeast. Read More > 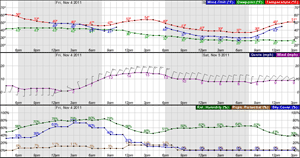